Posted on 4 February 2015 by Ravenmount

I need a time machine like the Tardis so I can hole up in it and read for a few days. Oh well! 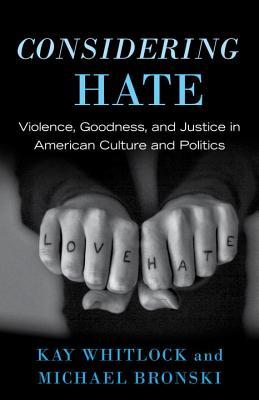 Last night I finished a book I got through a Goodreads giveaway, Considering Hate: Violence, Goodness, and Justice in American Culture and Politics, by Michael Bronski and Kay Whitlock.  It reminded me of school days, all those pretentiously overwritten books with overstated, under-supported arguments that take lots of careful attention and marginal notes to follow. In fact, two of the books I read for a gender and political theory course were by these authors, so I’ve read their academic writing before. I like the subject of this book better- I get that queer theory is important, but it is not one of my central topics of concern, and however I obtained my peculiar perspective on gender and race and other human characteristics, I felt that most of the books I read from the queer theory literature were trying to push me into being prejudiced in order to fit better with their world view and justify their antagonism.

It’s a silly thing, and yes, rationally I know better than to take such books so personally- I know they were not writing their books for me, but I had to wonder if this approach crystallizes prejudice and antagonisms where they did not previously exist in a percentage of readers. In fact, going from some of the theory in this new book on hate, one might suppose that in framing queer theory literature as if there is an enemy that hates queer/LGBTQ people, the literature may in fact support and engender the very hate they try to react against.

There were a lot of good ideas in Considering Hate, but the writing was annoying, with lots of buried thesis sentences, no conclusions at the ends of sections or chapters, and no subheadings, so that it was easy to be bogged down, mired in meandering, babbling pseudo-argument with lots of movie summaries and vague generalities. I am reading Socrates Cafe, now, a book about questioning as a form of active philosophy, and I am sure a Socrates Cafe group could enjoy doing a reading group with Bronski and Whitlock’s book. There is a lot in this book to discuss, but it is just a book to start discussions, making very little progress towards presenting solid arguments in any direction.

Socrates Cafe (Socrates Cafe: A Fresh Taste of Philosophy: A Fresh Taste of Philosophy), by Christopher Phillips, is a library book that is due tommorrow. Rather than renew it again, I am reading it today so I can give it back tomorrow. I like the idea of a group of people who get together to ask and answer questions, though it would appeal far more to my younger, intellectual crusader self.

In addition I am reading a few other books

I have a few other books I want to be reading, but I’m putting my foot down on starting any more books till I finish at least 2 of these.