Need some new book ideas? Here are a few books that might expand your awareness and understanding of the world. 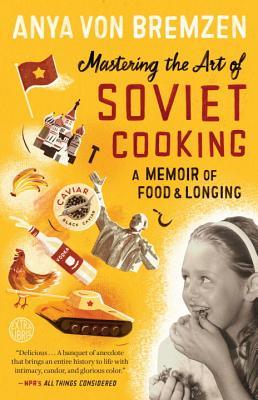 It took me a long time to finish this book because I was enjoying it too much to just read it quickly and move on. I’ve read a lot about Russian and Soviet history, but rarely about what it was actually like for ordinary people living there over the past century. I loved reading about the different eras of Russian culture and how they translated into different dishes. Even if I never get around to making my own fish pies, I learned a lot about Russian foods and traditions from this book.

The author and her mother set out to create meals that recreate the foods of pre-revolutionary Russia, and foods from the eras during and after the world wars. Mixed in with tales of food are anecdotes about what it was like living in Russia as it transitioned from era to era throughout one of the most turbulent centuries in Russian history. The author also describes modern Russia as it appeared to her when she returned there following years of living in the US. Recipes for several dishes from these meals are provided at the end of the book, as well.

Those Who Save Us, Jenna Blum

What would life be like if you knew that your father was a monster, in this case an SS officer, responsible for attrocities as an active member of the Nazi Party? What if this monster had a human face in your memory of him, and what if you secretly kinda liked him and miss him a bit? In Jenna Blum’s novel, a woman is trying to figure out for herself what to do with such questions, and she is trying to reconcile herself with her mother’s past as themistress of that SS officer. She takes on a project inspired by a university colleague and starts collecting stories from Germans who lived during WW2, to put human, real faces to the monster Nazis and Nazi-sympathizers in her mind. In the process she begins to deal with her own borrowed guilt at having been the child of a Nazi.

This is a tough book, presenting many of the ugly sides of humanity that came out during WW2. There are few, if any real good guys or bad guys in this book, and there are still many questions that remain by the end of the last page, but this is a great book for starting discussions about war, violence, and the ugliness our species still harbors and lets out during wartimes.