Posted on 13 February 2014 by Ravenmount

The Rowan, by Anne McCaffrey 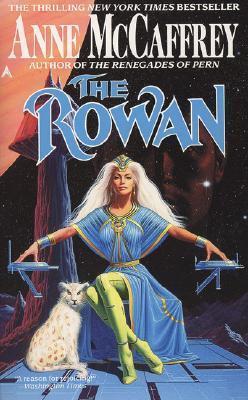 This book is the first in a series. The titles in this series, in order, are:

The Tower and the Hive

Get Off the Unicorn

Of this series I have read just the first 3, so I don’t yet know whether the series gets better or worse by book 6. Reading some of the reviews online this seems like a series that people either really love or really hate. I suspect part of this is due to the fact that this series combines the gushy romantic stuff of typical fantasy novels with the alien invasions and space travel of sci-fi.

Folks who are used to gushy fantasy will love the fact that this series has strong female lead characters and a bit more of the clarity one expects from sci-fi. Folks who are used to sci-fi may not know what to do with the gushy romantic bits, and may find themselves skipping pages to avoid the gunk they are not used to seeing in their typical science fiction adventures. Frankly, I find the ‘sexy’ scenes in sci-fi equally obnoxious and if there is going to be romance in my sci-fi/fantasy novels I would much rather at least be reading stories where the women are not included simply to be buxom sex-objects during long-term space voyages. Anne McCaffrey’s Tower and Hive series is a lot like the stuff Andre Norton used to write, and offers a somewhat healthier, more comfortable reading experience for those of us women who like reading books about space and aliens and future societies.

I’ll admit I read The Rowan just because it was a fast read, part of a sort of performance art project that involved tearing off each page of the books I was reading, leaving a pile of book pages in the paper recycling bin each day. I bought several bags of cheap, bedraggled books from a thrift store, books no one was likely to buy anyway and that were on their way to the landfill otherwise. I had the first three books from this series in those bags of books, so I read them, along with a lot of other books I might not have finished otherwise. But I did read them, and enjoyed them enough to recommend them to others. Maybe this year I’ll head out to the library to check out the rest of the series.