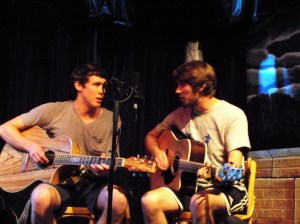 I visit quite a few venues over the course of my blogging work. Here is a summery of a few of those venues, mostly ones I frequent more often, that might be worth checking out if you haven’t yet.

Wild Boar Coffee (coffee/food/some alcohol/live music/live comedy) – This is a coffee shop, located near the corner of Lake and College, across the street from campus and the Trial Garden park area. Parking is a bit limited, but since it is so close to campus and so many of its regular patrons bike, there is pretty decent bike parking available. Wild Boar has my favorite local coffee (I haven’t tried all of the local coffee yet- coffee costs money and I am not getting paid for anything at the moment- so there may be others I like at least as much that I am too broke to try.) Wild Boar has live music several times a month in the basement section, and a comedy show on Fridays. 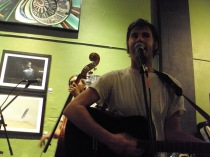 Cranknstein (coffee/food/alcohol/live music) – Cranknstein is located just north of the new cider bar I want to check out soon, near the corner of Laporte and College. During the day Cranknstein is a bike shop as well as a coffee shop, and they have food. Pretty much any time I am there (true for Wild Boar as well) food is no longer being served, but they have a bar with a pretty good beer selection. Several nights a week Cranknstein has live music, and many nights the bands are touring from other states. This venue doesn’t have a marquee outside or a good posted show calendar, and they don’t always do a very thorough job of posting on facebook about their music shows, but they consistently host a wide variety of really good music. 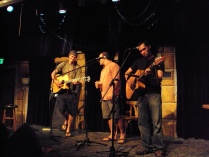 Avogadro’s Number (food/coffee/full bar/live music) – Avogadro’s Number is located on the west side of the tracks on Mason, just a bit north of the Mayor of Old Town (which is on the east side of the tracks). Avo’s is a restaurant and bar with a middle room and a patio that (in warmer weather) both have regular live music shows. This is where I have been holed up for winter, because they have a live music event of some sort just about every night, and most of the bands I want to catch will be at Avo’s sometime in the next few months. They serve food until 9-10ish, with a special late-night menu available some nights as well, which I appreciate because so few venues offer food options in the evenings.

Ti Bar (alcohol/live music) – This little-known and underappreciated little bar is located on Laurel, around the corner from the Fat Shack. It is a very attractive venue, not well lit for my show photography, but attractively lit for folks hanging out and dancing. This is a newer venue on the local scene, and has only been focusing on bringing in live music for a few months, but they have a nice stage and a good space for dancing. One of my favorite new bands What It Is (who emerged out of the Avo’s Open Mic talent) plays at the Ti Bar every Thursday night, and this venue has hosted a lot of hip-hop, R&B, rock and funk, aka stuff that makes for a great party. 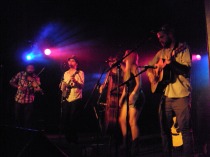 Hodi’s Halfnote (alcohol/live music) – Hodi’s is one of the well-established lcal venues in Old Town Fort Collins, located half a block south of Laporte on College, just south of Moe’s Barbecue (which also hosts occasional really good music shows, but has no real stage indoors). Hodi’s has 2 stages, a small one near its secondary bar and a bigger one in the back of the venue. This is not a place that serves food or coffee, just beer and other alcohol, so for food one would need to catch Moe’s or one of the other restaurants nearby before they close. But, this is one of the dedicated music venues that has a show of some sort every night, with a marquee above the door and online ticket sales on their website. I am not always as comfy at this venue as at Avo’s or Cranknstein- the seating is lousy or nonexistent, and for someone who isn’t drinking there are very few options, but for most people over the age of 21, Hodi’s is alright. (Folks under 21 can get into most shows but they pay an extra $5, even on free nights, and there are still not many options for non-alcoholic beverages and there are no snacks available.)

Road 34 (alcohol/live music) – Road 34 is located all the way on the other side of campus, tucked away on Elizabeth a block west of CSU’s Moby arena. This is usually a strictly over 21 venue in the evenings. During the day they serve food and the bike shop is open, but at night this is just a bar, and many weekends they have live music. In the past Road 34 had live music every Friday and Saturday night, and occasionally they had weeknight shows as well, but lately they have had fewer shows. Non-drinkers again have limited options here, but at least Panhandler’s Pizza, McDonalds and a good Wings restaurant are nearby that all stay open pretty late. One of the attractions to this venue is that their shows are almost always just $5 at the door. 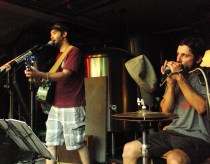 Tyler T. and B.J. playing at Equinox on the outdoor patio

Equinox Brewing Co. (alcohol/live music) – This lovely little brewery bar is located just south of the pedestrian mall in Old Town. They have a nice outdoor patio where they host live music every weekend when it is warmer, and a tiny indoor stage where they have live music every weekend when it is colder. This space reminds me of British pubs,tiny, cosy, with lots of hardwood furniture and accents, and that aged, well worn feel that the old pubs in London have. This is a bar, so the only non-alcoholic options are rootbeer and a lovely berrybeer, both not as carbonated as I would prefer and served in very small portions, but tasty. Their live music calendar features lots of great local musicians and bands, with very few touring bands. This is a good community-oriented space, and there are often families with kids hanging out here. Except maybe out on the patio, there is very little room for dancing, and there is not always enough seating during popular shows, but except on those super-busy, super-packed show nights this is a good spot to hang out at a table with friends and good local beers.

Narghile Nights – Speaking of limited options, Narghile Nights probably holds the record for offering the most limited options, of all the venues I’ve hung out at in the past few months. This venue is located half a block north of Laurel on College. They host some really good acoustic live music for their “Acoustic Corner” shows. They are a hookah bar, which means they don’t serve alcohol or non-alcoholic drinks, or food. If you like the idea of smoking something other than boring cigarettes, and from a beautiful pipe, while lounging on fancy cushions with your friends or your date, this place may be worth a try. I am a non-smoker, so not exactly their target customer, but it is a beautiful space and a neat experience to try every so often.

There are many other venues in town (including the Aggie, which is having liquor license issues thanks to too many under-age drinkers turning up there). Since I walk everywhere, I am sticking closer to home while it is cold, mostly just hanging out at Avo’s actually, but as it warms up this year I’ll be checking out other venues around my part of town. There are a few (including the Mayor, Tap & Handle, Surfside 7) that I know have live music, and quite a few more that I need to try out once I have enough funding to properly enjoy their ambiance. (I have been to all of the above venues enough over the past year to be familiar with them, but it does take some money, which I used to have more of, to really appreciate most venues.) In the meantime, if you haven’t enjoyed the above venues, they ought to keep you sufficiently entertained until I have funding to expand my blog’s venue radar. 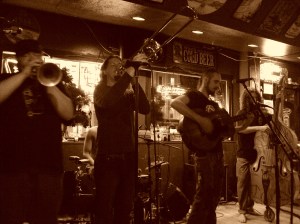