In Brief: Hog Magundy at Avo’s 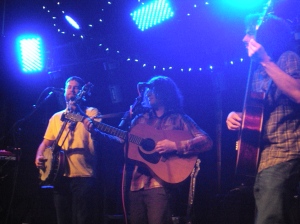 They weren’t the headliner for the show at Avogadro’s Number this Monday just past, but they were at Avo’s. Hog Magundy, who won tonight’s Waka Winter Classic, opened on Monday night for the now-touring Chicago band Old Shoe. Old Shoe brought their light rig with them, so both bands played bathed in the green, red and blue lights Old Shoe provided, a fun change from the usual Avo’s stage lights.

Sadly I missed the Waka Winter Classic show, since I was instead at the 1-year Anniversary Dead Jam at Avogadro’s Number tonight (and the Symbols showed up to play during the jam, so we even had a talented woman on bass and lead vocals tonight, which made me happy.) From what I’ve heard though, all the bands played very well at Hodi’s tonight. My vote, had I been there, would have been torn between Hog Magundy, Von Stomper and Free Range Pickens, and I’m glad that one of my picks won, and equally glad I didn’t have to decide between these three excellent Americana/Bluegrassy/Folk bands.

Congratulations are also in order tonight to Taylor Sims, who is the newest member of the popular bluegrass/folk/Americana band Great American Taxi. Also, finger-picking blues master Cary Morin and the fabulous Greeley blues band Bad Brad and the Fat Cats are both competing at the International Blues Challenge in Memphis, and both have advanced to the semi-finals.  It is not an exaggeration to say that we have some of the best blues musicians in the world here in our music scene.