While I already have somewhat of an exception to my ‘taking a day off’ plan for tomorrow, the music on my planner for tomorrow is a precursor to a show on Monday night. Technically tomorrow (the 12th) ought to be in the week’s review, but unless I get drawn into covering more than just the Dead Jam preview in Old Town, tomorrow’s music ties in more closely with next week anyway. So, here’s a bit of a review of the week’s entertainment as experienced by my trusty much-maligned pink camera.

SpokesBUZZ Bandswap homecoming show. This was the last of the homecoming shows for this year, marking the end of a very successful second year of this huge SpokesBUZZ event. The local band for this show was the Lindsey O’Brien Band, with the Nashville band Cumberland Collective and from Chico, Big Mo and the Full Moon Band. The weather was gorgeous, and the turnout was pretty decent throughout the show, though I’m sure the colder weather the previous few days scared away some folks who might otherwise have been at Avo’s for this event. Cumberland Collective actually played twice in Fort Collins over the weekend, as a headliner for the Saturday day-time Bandswap show in Old Town Square and as the opener for the Sunday show at Avo’s. Both days this band demonstrated how well it would fit in here, if these talented folks ever choose to migrate to Colorado more permanently.

Big Mo and the Full Moon Band was also a hit with our local audience, and their horn section, drummer, pedal steel and bass players all got to jump in on songs with the other bands by the end of Sunday’s show. There always seems to be far too little of this musician borrowing going on at the Bandswap shows, but what there was on Sunday seemed quite successful and fun for everyone. 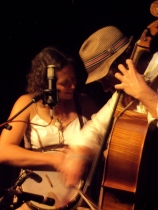 In addition to the daytime SpokesBUZZ show on Sunday, Avo’s also had a folk duo called the Littlest Birds, out of California, as the evening show. Featuring a variety of banjos, including a fretless one, and a cello and briefly a guitar, plus a cool-looking floppy straw hat, these two lovely people played a nice variety of folk songs, including a few old traditional songs and plenty of originals. They do have music up on spotify and elsewhere online, and are well worth checking out if you like acoustic folk music. I think they are far more dynamic live than their studio recordings would suggest, but if I had never seen them live, their studio albums are actually quite nice. The Littlest Birds will be finishing up their current tour quite soon, but will be back on the road for the next tour fairly soon.

This week’s open mic was actually a bit better attended and had a few more slots filled than the past few weeks. We had a substitute host/m.c., Derek Blake, filling in while the regular host Jason “Mutt” Rogers was away doing a stand-up comedy show. Two of the fellows from the cool new band A Brother’s Fountain turned up for a set, and while they were playing I noticed that quite a few people wandered in from other rooms. These guys are definitely a band to watch for this next year. They will be playing a featured artist spot at an Avo’s open Mic in a few weeks, a longer opening spot that will allow these guys to play more of their great original songs.

Whitewater Ramble was back in town this week to open a show at the Aggie for Tea Leaf Green, so I was of course at the Aggie Wednesday. This meant I didn’t get to Avo’s for the weekly bluegrass jam until about midnight, by which time it was pretty much over. So, this week there are no new photos from the bluegrass jam, but instead there’s a whole new set of photos of the bluegrass inspired rock band (they become more of a rock band every time I see them, but when they play acoustic sets, as they did at their CD release listening party in March, they still can do a stellar impersonation of bluegrass, too).

These lads performed my favorite of their songs, “Mr. Bankman”, which made my night, as always, along with lots of other high energy, dance-inspiring stuff. Their set this time included the Tim O’Brien classic “Nelly Kane”, which another of my favorite local bands, Rich With Friends, also performs, though these two bands’ stylistic approaches for this song are a bit different. I think Whitewater Ramble’s version is actually just a bit faster, though Rich With Friends already plays this song very fast.

Avogadro’s Number hosted two excellent bands on Thursday night, the Graham Colton Band and the Bronze Radio Return. These bands have been touring together for a couple weeks and are just about to the end of this tour. They played easily one of the best shows I’ve seen so far this month, and as several people in the venue afterwards observed, the energy at Avo’s during this show was more akin to what one might expect at Hodi’s or the Aggie, in a good way. I’ve seen a few other shows at Avo’s that were this successful, but not many (though most shows at Avo’s are pretty good; Avo’s books some amazing music). 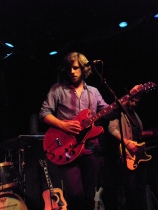 Graham Colton tried out a bunch of new material on the audience, and to my ear they seem to have several songs that are very decidedly mainstream radio-worthy, while still being really solidly good songs. If you like Winchester Holiday and Fierce Bad Rabbit, you will probably like Bronze Radio Return, and Graham Colton is somewhere in that spectrum as well. Actually both bands have a very commercially viable sound, and would make a refreshing change from some of the stale pop currently turning up on mainstream radio. Hopefully these guys can get a couple breakthrough hits soon so they can emerge on the national pop scene, though sadly that would probably mean they’d be too ‘big’ to fit in Avo’s next tour. 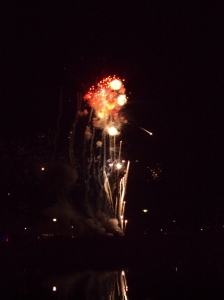 Homecoming at CSU- I spent much of the afternoon and early evening on the CSU campus taking photos of the Homecoming events. Better Than Bacon was playing on the stage at the Oval, and following their first set was the Homecoming parade, including the very cool Chinese dragon and a huge troupe of baton twirlers, plus lots of horses, a few floats, a few costumed people, lots of politics, and of course the CSU marching band and mascot ram. Tony Frank, CSU’s president, was walking with the ram, carrying the poop-scooper to clean up after the ram as they walked the route. The weather was a bit chilly, but much warmer than last year, and thus the parade was at least twice as long as last year’s.

The turnout was also much better, and lasted a lot longer, since people weren’t just showing up for the parade and then retreating to someplace warm. The fireworks still ended with a mushroom-shaped cloud of smoke and big boom that suggested perhaps the show didn’t quite go off as planned, but maybe that cloud of smoke is becoming a tradition in itself. The rest of the show was nice, though not quite as well designed as last year’s (there were a few too many lone rockets that could have been much more effective if they were grouped with other elements).

Many years ago, when bluegrass jams at Avo’s apparently occurred on Tuesdays, a group of players coalesced into a bluegrass band. While they have gone by many different names, they are still playing music together, currently under the name Capo Zero. The room for this show was actually just as packed as for the previous night’s show with Graham Colton and Bronze Radio Return, though the tables were pushed so far forward this time that there was no space available for dancing. There were too few chairs for all the audience to settle in, too, so if there had been more seating and a dance floor, there might have been even more people at this show. Having seen a few nationally touring, really good bluegrass bands, I think these guys were just about as good as any of the big-name touring bands we get in Fort Collins. They had some trouble with their lyrics occasionally, but aside from such snags, this was a very good bluegrass show. Fort Collins gets very spoiled within this genre, since so many top-notch bluegrass players have settled in this general area, but take this band to someplace where world-class bluegrass is always imported from outside, and these fellows could probably pass for a world class bluegrass band, fudged lyrics and all.