Did you make it out for the last Downtown Summer Session last night? Then you might have heard this luscious Winchester Holiday song, which was also on the Whensday soundtrack. This band played a fantastic show last night, opening for Fierce Bad Rabbit (who as always were also awesome). While Winchester Holiday doesn’t have any CDs available yet, they are almost done recording their debut album with Stout Studios, here in Fort Collins.

If you missed these 5 handsome fellows last night, they will be playing on September 6th at the Fall Harvest Brew Fest at the Lincoln Center, for which tickets are still available. 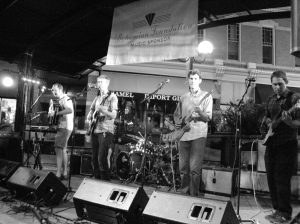