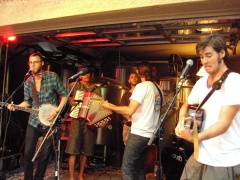 So much for posting a “Ravenmount Radar” for Friday. My apartment still smells like cement dust from the partially remodeled but no longer functioning shower, and by the time the fellow working on the remodel left, it was almost time to head out to Equinox for the first of tonight’s shows. My local liquor store couldn’t give me any boxes today and the friend who had boxes to give me headed out of town, after another failed attempt at our coordinating to get her boxes to my apartment.

I was glad after all this that I had some great music shows lined up tonight. I caught Von Stomper at their first show of the night at Equinox (they played again at Cranknstein from 9-midnight), and enjoyed a bit of the Jeff Brinkman Band on my way from Equinox to Pateros Creek for the week’s comedy show at that venue. On my way back south from Pateros Creek I stopped in at Narghile Nights (the hookah bar at Laurel & College) for Tyler T.’s show there. The shows I missed? The Yawpers played what sounded like a crazy show at Road 34 tonight, and there was a multi-band show at the Art Lab (across from Bizarre Bazaar) that I would have attended had I figured out how to clone myself. Also, not a show I’d known about, but Branden Sipes was playing a show in one of the basement venues along College tonight. I heard a bit of him singing with the woman who was also playing in that show, and if I’d had just a bit more time & energy I’d have stopped in for a bit, but I was on my way elsewhere. Branden is one of the artists who has been involved with Streetmosphere this summer, and has some great original songs among the stuff he performs a lot.

Tomorrow? There is a big multi-band show at Avogadro’s Number tomorrow involving the Free Range Pickens, Von Stomper, Papagoya and the Funky Tunk Heroes, starting at 6pm and running till 2am, so I will be there much of the night. But, if I head to Old Town, Das Wunder Band will be playing at Equinox from 6-8, Ambassador Wolf and Avocat will be playing at Hodi’s ($5 (plus $5 if under 21), doors open at 8), and the Echo Chamber plays at Road 34 with 2 other bands ($5, 21+, 9-close).