Miss Tess & the Talkbacks– Old-Timey Western Swing
– on tour, this band had two shows in Fort Collins today, the first at Odell’s Brewery at 4pm this afternoon, and the second at 7:30pm here. They will be in Missouri playing a show in Columbia on Friday, April 5th.
Facebook Page, Band Webpage

Nick Bonnett and Tyler (percussion)– Some of these songs sound like they are about ready to be on an EP. Nick is one of the regulars at this open mic, but this week he had his friend Tyler playing percussion with him, and he was joking around about band names. Perhaps this is a sign of things to come?
Facebook Page 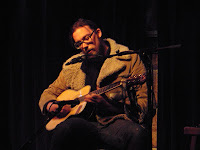 Brandon Cochise– singer-songwriter w/ guitar
– This was the first time I have seen Brandon, but he has been to this open mic in the past before I started attending these. This guy’s most memorable song segment was probably his rendition of “Shortn’in’ Bread”  in a great low gravelly voice that came out of nowhere. Brandon also plays guitar very well.  Brandon’s Youtube Page 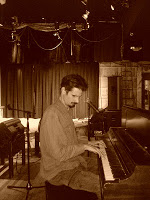 Brian Collins– songwriter, piano
– new Seers album out soon, recorded w/ Darren at Stout Studios
– The Seers will be performing at The Tap & Handle on April 19th, and Wasabi (with which Brian plays piano) plays at Crankenstein, both shows within the FoCoMX music festival
The Seers Facebook Page 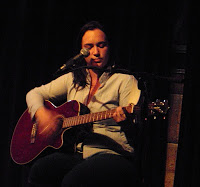 Brooke Reiss– singer-songwriter, gal with guitar– Brooke’s songs are also sounding ripe for an EP. She only started playing sets on stage for live audiences in January, though, so for the time being, the best place to catch her music is live at these open mics. Brooke is one of my favorite emerging artists currently on the local Fort Collins music scene.

Jesse Niethammer– singer-songwriter, guy with guitar
– Jesse has been bringing his nifty new smaller guitar the past few weeks, but this week he brought his regular-sized guitar again. He gave us a variety of songs again, including some more of his rap/hip-hop on guitar (a sort of Ed Sheeran inspired reinterpretation of hip-hop) and a comedy tune. This fellow has a great stage appearance and is probably a hit at Greek parties and house parties. The open mic at Avo’s is sometimes an odd fit for his music, but it seems to at least offer Jesse some stage time to practice his songs for an audience of some sort. And, slowly but surely, some of the regular Avo’s audience is relearning a few of the old hip-hop classics Jesse likes to revive in his sets.

Ryan King– guitarist
– This was the first time Ryan has played at this open mic. He’s not a singer, but his guitar-playing is good enough to not really need lyrics, though he would do well to consider teaming up with someone playing percussion or a second guitar line for some of his more complicated songs.

Kevin Bennett– piano and voice, comedy
– Many people in Fort Collins know Kevin as “French Accent”, the accordion player and comedian who harasses/entertains us at the various comedy open mics and showcases around the area. But new, tonight, Kevin did a second set as himself, playing piano covers of “Hotel California”, “Time in a Bottle”, “Big Shot”  and “Baker Street”. He may need a few more nights of practice, as he was clearly just getting used to being a piano playing entertainer but if the accordion act ever falls really flat Kevin certainly has at least one fall-back wherever a piano is available. 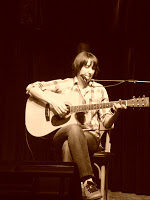 Elyse Miller– singer-songwriter, gal with guitar, ‘sound-guy’
– Elyse is the gal who does sound for the open mic, and lately she has been gracing the stage with a few of her own songs at the end of each week’s show. Many people new to this show don’t expect the ‘sound guy’ to be a musician of any note, but Elyse is an excellent singer-songwriter, and has a lovely mix of sweet pretty tunes and a tougher edginess.
Elyse’s Webpage