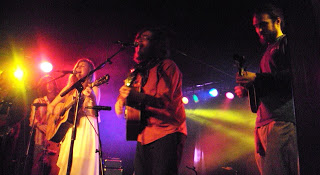 I love the idea of brand new music, musicians and bands. Sure, in our society we seem to have an awfully short attention span, and many mainstream artists only get a few weeks or days of fame, ever, after which they get to struggle for attention along with everyone else. Local music is not immune to this problem, but in genres where knowing instruments is a part of being successful, genres like bluegrass and Celtic traditional, musicians seem to float from band to band and those bands change lineups every few months or so. As a blogger new to a particular scene this can be very confusing. So, a band like the brand new bluegrass ensemble Free Range Pickins is quite refreshing. Here is a band made up of young people relatively newly emerged onto the folk/bluegrass scene, but with a musical talent that may keep these musicians playing together through at least a few albums. 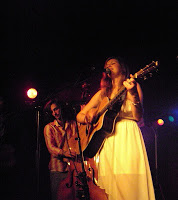 Free Range Pickins was born in the summer of 2012 when Robin Lewis and Derek Blake started playing folk music together. Derek plays in several other local bands, but Robin is pretty much brand new to the Fort Collins music scene. By fall 2012 Taylor Schuck had joined Derek and Robin, still playing as a folk act, and at a show booked at a local restaurant in downtown Fort Collins this ensemble acquired its bluegrass elements, Mark Rooster and Joe Micek, with whom Free Range Pickins emerged onto the Fort Collins bluegrass music scene as a brand new ‘new-grass’ or contemporary bluegrass band. They have not even had their first local tour yet, though they are in the early planning stages for some sort of Colorado Front Range tour which may work out for later this year.

I first encountered this band through Mark Rooster and Derek Blake while enjoying my first Black mountain Ramble show (a monthly local/regional music showcase that takes place at the Wild Boar coffee shop here in Fort Collins on the first Thursday night of every month). Mark plays banjo, but he seems most content when he has a harmonica in his hand. Derek plays guitar and sings, as a soloist at showcases and occasional open mics, and as one of the principal singers of Free Range Pickins. I was unable to see the first Free range Pickins show these lads invited me to, as I was already double and triple-booked that week for just about every evening. Early this month though, once again at Black Mountain Ramble, I had another chance to run into Derek and Mark, and got to see their band two nights later when they were opening for a nationally touring, and absolutely fabulous bluegrass band, Iron Horse.

That I remember any of Free Range Pickins’ set at all after hearing Iron Horse play is a credit to the talents of this local band, frankly. For the entirety of the Iron Horse set I wound up sitting actually on the corner of the stage itself (better even than being in the front row unless you want to dance or socialize) because the stage area was so crowded with a sold-out show’s worth of very happy, and very drunk people. Thankfully the room was a bit less packed during the Free Range Pickins’ set or I would not have been able to take pictures very comfortably during their show (& taking pictures was the official reason I was there). Still, it was a cold night. The line snaking out from the door when the venue opened ticket sales for the last 50 tickets was quite long, and i am sure a lot of people were turned away once tickets sold out. Many people stayed inside the venue once they bought their tickets, rather than head back out into the cold, so there were many people in the audience for the opening band that had not intended to see both acts. From everything I heard and saw, I am sure that the general consensus among all the folks at the venue was that both bands were fabulous.

Bluegrass is often a genre that portrays itself as a bunch of hairy unwashed players on some street-corner, and I have met quite a few bluegrass musicians for whom this image is quite the reality. The fans this vein of bluegrass attracts are generally the contemporary version of the folks my dad hung out with in Boulder City Park in the 60’s, a fun crowd, but not necessarily a scene that will appeal to more diverse or mainstream audiences. Certainly some of the lads in Free Range Pickins are hairy enough that they could throw on some old flannel and blend in with the more traditional bluegrass bands, but the other principal singer alongside Derek Blake sets the Free Range Pickins in a different vein. Robin Lewis is a pretty lass who wears summery dresses on stage and looks like she might just as easily take on the solo ladies’ Country genre alongside the likes of Taylor Swift and Kelli Pickler. 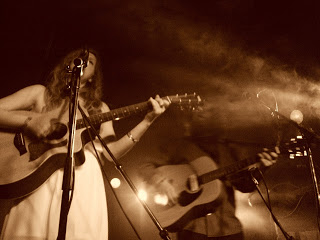 Robin is also a pretty decent songwriter and musician, of course- even a drunk audience won’t fall in love with a band for its pretty girl-singer if the band is awful. In fact all the musicians in this new band are very talented and seem to really enjoy making great music on stage together. The only bad thing in my book about emerging artists is that you’ll have to take my word for it, unless you can catch this band playing live, but one of these days I’ll no doubt get a few video clips of my own of this band, which will be available on my facebook Ravenmount page, of course. While this band has yet to release any songs online, their facebook page does offer a few links to youtube clips from their shows so far, and there will no doubt be a lot more to come from this fantastic emerging newgrass/bluegrass band. Keep an eye open for new Free Range Pickins shows in the Fort Collins area, and if this band makes it to the rest of the Front Range soon be sure to check them out wherever they have a show near you.

Independent science nerd/writer/music blogger/arts enthusiast/theorist currently in Colorado.
View all posts by Ravenmount →
This entry was posted in Fort Collins. Bookmark the permalink.