Posted on 8 February 2013 by Ravenmount 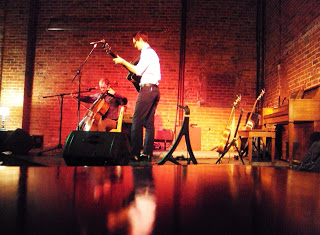 How much different music can a music blogger handle in one night? Two weekends ago quite a few musicians I am interested in had shows all in the same two days, and not all of them overlapped. The first of these nights offered a show at Everyday Joe’s Coffee Shop featuring one of my favorite local duos, The Query, plus a fellow I’d never encountered, Levi Bagdanov. Then, an hour after these guys finished their show, the Road 34 show would offer a night of Country/ Americana music with a Waylon Jennings cover band called the Wailin’ Willies, opening for a very well-regarded local band, Halden Wofford and the High Beams. It only takes me about 40 minutes to walk from Everyday Joe’s to Road 34, theoretically, so of course I’d go for it. Of course, these plans are always a bit easier in my imagination that in real life, but this time it worked, aside from sore legs the following morning and being totally exhausted with a stubborn headache by the time I ducked out (during one of the encores with which Halden Wofford and his band rewarded their very enthusiastic audience). 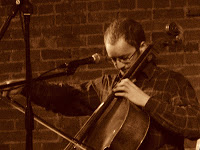 My favorite set out of all 4 was easily the Query, despite Jonathan’s lingering cold that threatened to derail a few of their songs. They played many of the songs off their lovely EP, A Little Night Music, and some new ones I hadn’t heard before, including a cover with lines I could have sworn were Lady Gaga lyrics, but surely the Query wouldn’t be covering Lady Gaga! Whether it was in fact a “Judas”/”Bad Romance” Lady Gaga cover or just something with very similar lyrics, it sounded very cool, and would be a welcome addition to this duo’s next album. 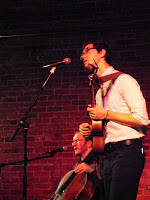 Another new song, “Solitude”, may also edge out some of their earlier songs as a new favorite, with its catchy chorus and the nice percussive bits Sam works in with his guitar. There so far has not been a song yet in their shows that I dislike, though, so my favorites are only relative when it comes to this band. One particularly nice addition to Query’s suite of internet sites is their new bandcamp page, which right now just has their EP, but which hopefully will have new music too later this year. 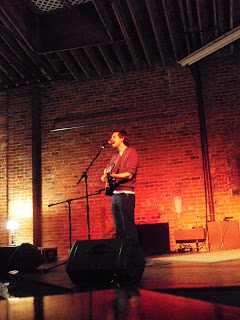 The Query opened the Everyday Joe’s show, and before they’d sung enough music to wear out Jonathan’s vocal cords for the rest of the night (he was recovering still from being ill earlier in the week, and could probably have used another day or two of resting before hopping onto a stage with his cello), these guys relinquished the stage and Levi claimed his spot at the microphone. His set started out shakily, with his guitar tuner refusing to cooperate so that he eventually had to borrow one from Sam to coax his guitar into submission for the show. He was playing to an audience of people who did not know who he was, and it took a few songs for Levi to warm up and start engaging the audience. Once he started talking about the songs he was playing, and about his background, his show got a lot better. He still seemed a bit lost playing by himself, as if he missed having other musicians on stage with him, and my notes during his set keep going back to how much better his music would sound if he had a second guitarist to perform with, at least. It didn’t help that his set was following one I particularly liked, of course. By the end of Levi’s set he was starting to sound really good, and I suspect if I saw him on a stage he is used to, playing for an audience that knows him, he’s probably very good. Hopefully he’ll do more shows in Fort Collins this year, maybe for one of our many festivals, so we can see him again. 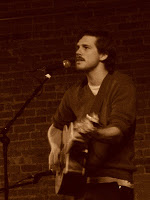 Actually Levi Bagdanov was a pretty good segue from the Query into the Road 34 show. The Query is definitely a folk/classical experimental sort of band, and the rest of my night would be decidedly in the range of music one might expect in a rural country bar. Levi Bagdanov’s solo acoustic music is in the blues/rock/country range, certainly a change of pace from what Sam and Jonathan were doing, but not quite the honky-tonk band that would be next on my schedule. 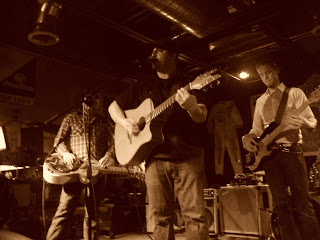 After a chilly but uneventful walk I arrived at Road 34 just shortly after the Wailin’ Willies took the stage to open the night. Two of the lads in this band were friends of mine already, musicians who played in other bands I’ve seen, so I was glad to finally catch this band’s show. I am only a lukewarm classic country fan, so I could only sing along to maybe half of the songs they played, but I actually could sing all the words, including later verses, for several of the songs they played during this show. Since this is a tribute band, all their songs are expected to be covers, of course, but they put a bit of their own stamp on their renditions, so that if you didn’t know they were all covers of older songs, most of their music sounds quite contemporary. Just as I liked a lot of the Blind Melon songs Soup covered, despite not really liking those same songs in their original form, I liked some of those old country songs in their Wailin’ Willies form. I’ll have to go back now and listen to the originals again over the next few weeks and see if I might appreciate them better now, for both the old country songs and the Blind Melon songs. 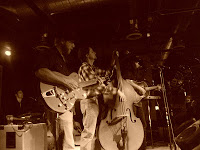 Halden Wofford and the Hi Beams played the longest set of the 4 acts I saw in this one-night marathon, and it started after I was already getting tired. I wish I could have squeezed in a nap between the Wailin’ Willies and this last band, because they really were terrific, but I was getting to be too fatigued to do them justice. I did actually dance, not my idea, but not against my will either, with one of my friends from the other band, near the end of the Halden Wofford show, a first for me since I started really thinking of myself as a blogger. The fellow with whom I was dancing actually knows how to dance very well, and I dance pretty badly even when fully awake, so I’m just glad he was wearing closed-toed shoes so that he still has all his toe-nails. 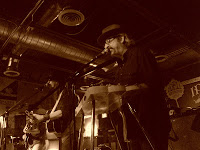 Halden Wofford and the Hi Beams play the sort of Americana and Country swing that are irresistible, luring people out to dance and keeping even the most resistant audience members’ feet tapping in time. As I mentioned earlier, I left during one of their encores, because they had such an incredible and infectious energy that the room was still pretty full by 1:30am and still dancing and cheering on the band as loudly as they were doing at midnight. It made taking photos challenging, since the area right up by the stage was full of drunk swing-dancers, but I still got plenty of pictures and everyone had a great time. I only left before the music stopped because I was ready to fall asleep standing up, and even then, I suspect my feet would have been moving in time to the music as I snored. The Query was my favorite, but I do hope to see this last band again sometime when I am not so tired so I can enjoy it a bit more fully. 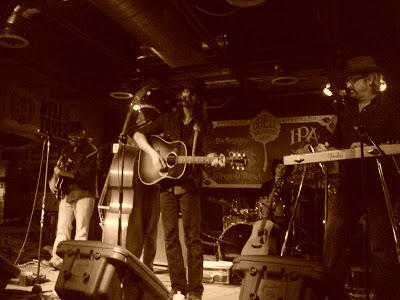