Gearing up for Ryan Kelly’s "In Time" Anniversary

Ryan Kelly, one of my favorite musicians currently living, will be celebrating his album’s anniversary on October 22nd. Ryan’s excellent first solo album, In Time, happens to include “The Village That They Call the Moy”, which I really like, along with lots of other great original songs. One of my other absolute favorite living musicians, Neil Byrne, had his release date anniversary for his Pale Blue Jak project album, Faces, on Sunday October 14th, but we are still waiting for his blog post. 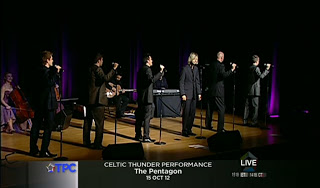 Celtic Thunder did perform at the Pentagon today, so I suppose Neil is forgiven for not getting his post finished right away, but I hope to have more to report from his end sometime soon. This blog has been deficient wrt Neil Byrne news and photos for far too long. Ryan, meanwhile, is having a photo contest, for which the prizes are an actual phone call from him, for the grand prize winner, and a tweet for ten additional lucky winners. (Prizes seem pretty easy to come up with, for sexy Irish singers anyway.) I would love to actually talk with Ryan sometime, but I doubt that his prize phone call is meant to be much more than a brief chat. Still, it’s more than enough of a prize for a photo contest.

Ryan will also be doing another live chat via stickam, on the 22nd, and I hope by then I can figure out why my computer hates stickam so I can actually log in. I was present and watching for Paul Byrom’s latest stickam chat and for Damian McGinty’s, but so far I have had lousy luck logging in successfully. Still, this video chat idea has been pretty great for making these guys more accessible to their many scattered fans. I hope Neil might find time to do a live video chat too sometime soon, but obviously doing one yesterday didn’t happen.

One thing that is certainly cutting into Ryan and Neil’s time a bit is that they are starting to put together their next leg of their Acoustic by Candlelight tour. They have dates posted for Washington, Oregon, California and Texas so far, so I am hoping maybe Colorado will be in there somewhere, if they don’t try out their set list in a show here while Celtic Thunder is here in November. A smaller show like theirs would not just be great music and a chance to actually meet both these lovely men, but it would be small enough that my camera could actually get some decent pictures no matter where I’m sitting. I do seem to enjoy being at shows more if I can take pictures, anyway, and taking some good pictures of these two men would be a highlight of my year for sure.

I’m not holding my breath- Neil and Ryan have a lot of people demanding things of them, and I can’t offer much- but in any case exciting things are in the works from both of these guys. I am still hoping for a tour album soon so I can put their version of the Hothouse Flowers song “Don’t Go” on my songlists. While we are waiting for more updates from these guys, take advantage of this time to check out SHEL, Mama Lenny and the Remedy, Europe, Katie Glassman, and all the other great music acts on this blog, and as always, let me know by tweet or whatever if you have suggestions of music I ought to try listening to.